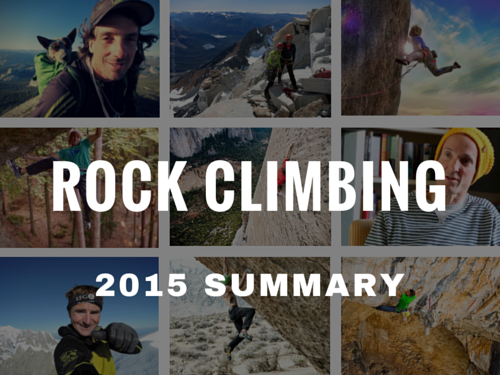 From big walls in Yosemite to hard boulders in Wicklow, from alpine peaks to Donegal cliffs, 2015 was truly an amazing year and here is a not-so-short summary.

The Down Wall comes down – Tommy Caldwell and Kevin Jorgeson made history by
free-climbing probably the world’s hardest climb to date. The 32 pitch route took 19 days
to climb and it attracted over 1 billion media impressions making it the most televised
climb ever. Freeing The Down Wall was a pivotal achievement in climbing not only
because of its progression of the sport but also it has brought climbing into the spotlight of major media channels.

Fitz Traverse – Tommy Caldwell and Alex Honnold have completed one of the great challenges of Patagonian alpinism: the so-called Fitz Traverse, crossing the full ridgeline of 11,171-foot Fitz Roy and its six neighbours. The north-to-south traverse took four full days (plus approach and descent), even though Caldwell and Honnold simul-climbed much of the route in approach shoes. The two men had generally good weather but poor conditions on the rock.

This girl can – 13 year old Ashima Shiraishi reapeted Catalunia’s 9a+ classic Open Your Mind at Santa Linya, becoming the first female to claim the grade and arguably the strongest climber on the planet. Mind you Adam Ondra got his first 9a+ at the age of 15.

The Girl in The Forest – In mid March, Michelle O’Loughlin headpointed The Thing in the Forest E7 6c (Cooley Mt. Co. Louth), her first E7 grade and the very first female ascent of this route. 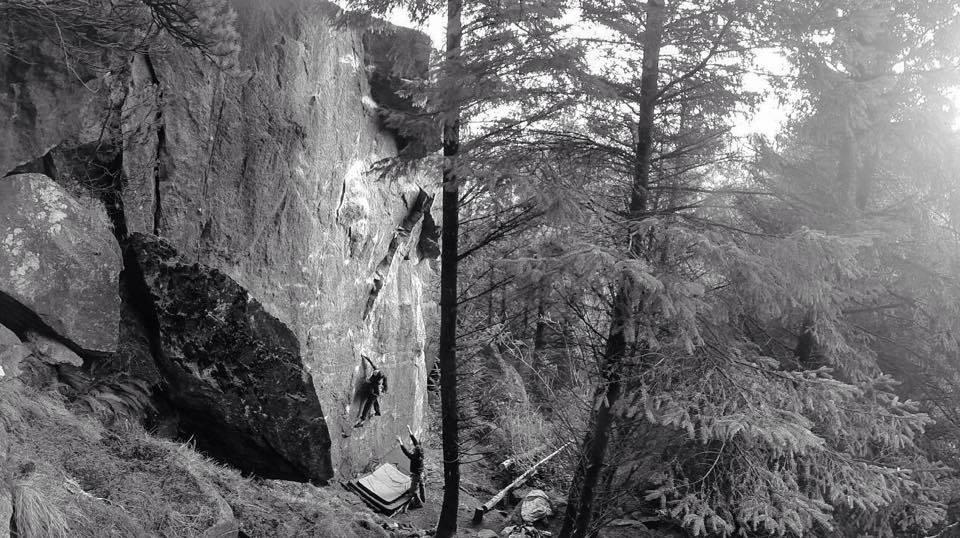 The Guru and The Queen of Irish trad Calvin Torrans and Clare Sheridan topped yet another E4 in Donegal’s Poison Glen, Ireland. Gallowglass (E4 5c, 6a) is a second E4 established by the couple in Poison Glen in recent years. Most of all Calvin and Clare proved that you are never too old for a hard trad. 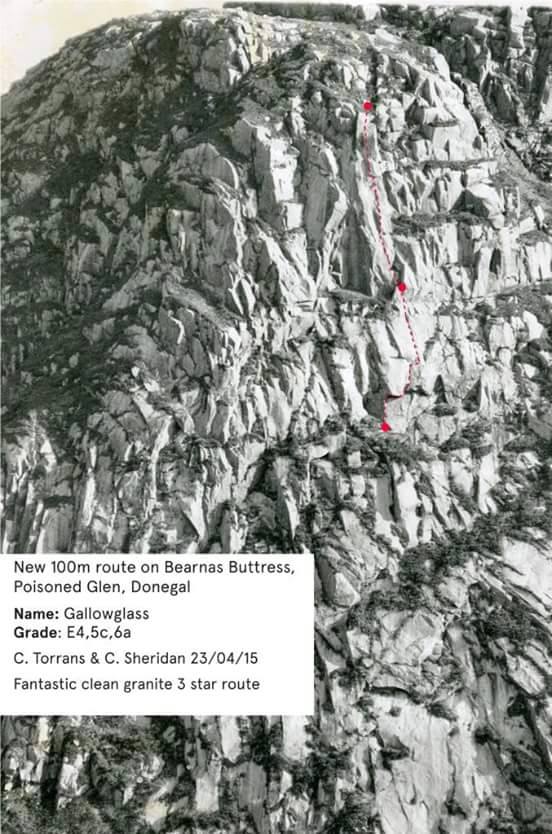 El Bon Combat 9b /b+ – One of the hardest climbs of 2015 and Chris Sharma’s hardest FA to date.With its proposed grade 9b+ El Bon Combat is 5th hardest route in the world and is currently awaiting second ascent if anyone is interested.

The Hills Have Eyes 8a+ (V12) – David Fitzgerland, a Dublin based wunder-crusher repeats Michael Duffy’s classic in Glendasan, Co. Wicklow. According to David this is his most rewarding project to date: The biggest attachment I’ve ever had with a project. Completely fell in love with the process. I decided to try this line when I was just starting out in some ways, when I still had a lot to learn. This climb really allowed me to see a measurable progression in my own climbing and it taught me a lot about projecting lines at my limit.

The King is Back – Climbing legend Ben Moon, who was the first ever person to climb mystical 9a in 1990, has made the 4th ascent of Rainshadow 9a at Malham Cove, England.48-year-old British sports climber Ben Moon proves that age is no barrier to this sport with his astounding redpoint yesterday of Rainshadow, the 9a continuation of Raindogs at Malham Cove freed by Steve McClure in 2003.

Long Runs Ricky – Local dude Ricky Bell sends some impressive first ascents in the North – with Long Runs the Fox (FA Solo – Headpoint E9 6c) at Fair Head (agreed to be Ireland’s first and the only E9 to date) and Peace Time E8 7a at Buzzard’s Roost.

Dalkey’s Last Hard Problem? – Dave Ayton makes second ascent of Slapstick E7 6c – reportedly the hardest route in Dalkey’s Quarry, Dublin, which had to wait 16 years for its second ascent. This route didn’t have to wait for too long for its third ascent, which belongs to Brian Hall.

Eiger Paraclimbed – a team of British Paraclimbers successfully climbed the West Flank of the Eiger to raise awareness about the life-changing possibilities of climbing with disabilities. The group included three climbers: John Churcher (blind with 3% vision), Alex Taylor (with MS), and Jay Owen (with autism). The team was assisted by Mark McGowan and Colin Gourley.

Rockagirl Michelle O’Loughlin headpoints The Rockafella E7 6c at Fair Head making it her second send of that grade.

YES He Can – Chris Sharma said yes to Jimena and that made the biggest news in August.

82 x 4000 – Swiss speedster Ueli Steck finished his goal of climbing all 82 of the Alps’ 4,000-meter peaks without motorised assistance. Alone or with partners, he hiked, climbed, biked, skied, and paraglided up and down all 82 peaks in 61 days, starting in mid-June. Steck climbed and hiked an estimated 100,000 meters in all and cycled more than 1,000 kilometers.

Galactic Fitz Strikes Back – At the hight of the midge season David Fitzgerald strikes again and sends two mega projects in Co.Wicklow i.e. People of the Sun (8A+) in Glendalough and Intergalactic (8B) in Glenmalure.

Thor’s hammer Known for hard bouldering Daniel Woods has made the 4th ascent of Adam Ondra’s Thor’s hammer, 9a+. Also Dave Graham made the 2nd ascent of The Illusionist, 9a, both in the Hanshelleren cave at Flatanger, Norway.

Tokyo 2020 – Sport climbing has been proposed as an additional event for the Tokyo 2020 Olympic Games. Sport climbing together with  skateboarding, surfing, baseball/softball, and karate were named as the final five sports which have been recommended for inclusion. 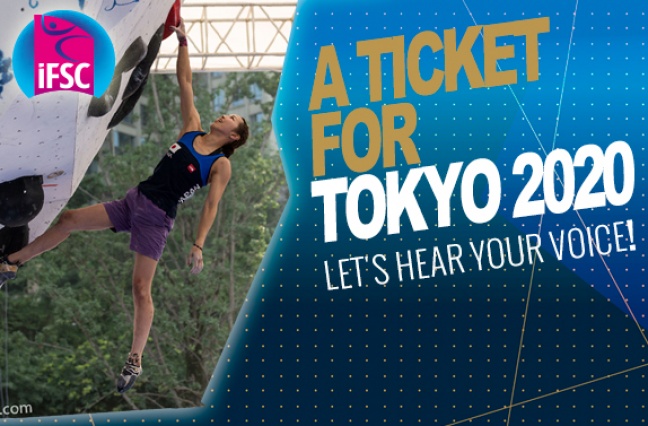 Steep and Hard – After five days of trying German wunderkid Alex Megos sends Supernova 9a+ /b, Frankenjura’s toughest line.The grade means it’s a contender for the most difficult route Alex has ever climbed.

Lapsus 9b – Stefano Ghisolfi has made the first ascent of Lapsus at Andonno in Italy. He suggests 9b, which, if confirmed, means it’s the hardest route in the country.

40-Year-Old Dani Andrada Sends 5.15a/b – Dani Andrada has redpointed Chilam Balam in Villanueva del Rosario, Spain, completing the fourth ascent of the 80-meter route. The 40-year-old climber spent about an hour climbing the route’s 235 moves, taking advantage of two dozen knee-bar rests along the way. Chilam Balam was first climbed in 2003 by Bernabé Fernández, who gave the climb a 9b+ (5.15c) rating, then the hardest in the world. Adam Ondra made the second ascent in 2011.

Leftism 7c+  – Hard work, persistence, and training always pay off in climbing and Adam Ryan knows something about it. After many hours of projecting and practice, be it at night or during the day, Adam’s dream-come-true project finally fell under his feet.

Donegal Rock Climbing Guidebook  by Iain Miller (aka Unique Ascent) has finally been published and it may be purchased on Mountaineering Ireland website.

R.I.P. John Ellison – Unfortunately 2015 has ended rather sadly. On Sunday 27 December 2015 John Ellison, the founder of the charity Climbers against Cancer, passed away. In the space of just a few years John achieved the unprecedented feat of bringing the entire climbing community together through CAC, aimed at raising awareness about cancer and raising over €500k funds for research against this disease.